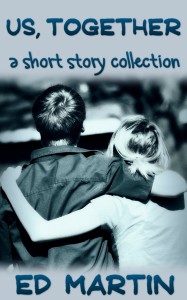 It finally appears we’re getting spring this year after all. To commemorate the warmer weather, green grass, and chance for outdoor activities not requiring mittens, this week’s excerpt is from a short story, “Man of the House,” that’s in my collection Us, Together.

For eight-year-old Jerry, Sunday, May 17th, 1987, started as a day just like any other, with church in the morning followed by an afternoon on the couch watching baseball with Dad. Mom kept popping her head in from the kitchen to complain about the beer, the cigarettes, the TV being so goddamn loud and didn’t he realize the baby was trying to sleep?

Of course Dad must have realized it, sitting there hunched over, rubbing his temples and downing can after can of Budweiser. Good American beer for a good American man, he always said. When Jerry was older he was never able to drink the stuff himself, told everyone it tasted like crap but really the taste brought back memories that made him cry.

But that day in May, that Sunday, Jerry wasn’t crying. He was eight years old, bouncing on the couch, rooting for the Cubbies. Asking Dad if he saw that play, if he thought it could’ve gone another way, if that ump was crazy, and Dad just sat there on the couch, drinking beer after beer, not answering.

Read the rest of the story, and five others about kids trying to cope with what life throws at them, in Us, Together, just $.99 at Amazon.

And then post a link to your eight sentences blog entry, or join the fun at the Weekend Writing Warriors website.