Author George Wells has tagged me to answer some questions about my Next Big Thing, which is a collection of short stories I’m releasing at the end of May. 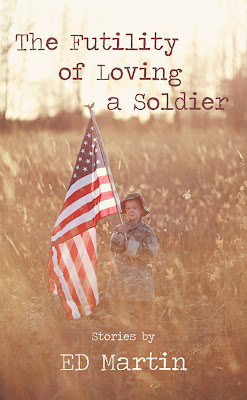 1. What is the working title of your story?

The collection is called The Futility of Loving a Soldier, with eleven stories in it.

2. Where did the idea for the story come from?

Like most stories I write, I look at the people around me, at their experiences, and try to guess their thoughts and motivation. One of these stories came from a conversation I had with a homeless veteran; 5 of the stories are connected and are roughly based on the military history of five generations in my family.

3. What genre does your story come under?

I aim for literary fiction, as I focus more on character development than fast-paced plot, but probably just general fiction.

4. Which actors would you choose to play your characters in a movie rendition?

Since they’re all short stories, I haven’t thought about it. It would be wonderful though if someone made them into short films.

5. What is the one sentence synopsis of your book?

The physical and psychological effects of war on both those who serve and those back home who love them.

6. Will your story be self-published, published by an independent publisher or represented by an agency?

A couple of the stories have already been published in various webzines and sites. The book will be self-published, but if my novel gets picked up by a publisher I might look into having them reissue this as well.

7. How long did it take you to write the first draft of your manuscript?

I’ve been working on these stories for a couple years, with each one taking anywhere from a day to several months to write.

8. What other books would you compare your story to within your genre?

Probably Stephen King’s Hearts in Atlantis, which is a collection of shorts and novellas with connected characters and themes. In addition to the military theme of my stories, two are about the same characters at different places in their life, and five show the effects of the military on five generations in a family. So, lots of connections.

9. Who or what inspired you to write this story?

As a writer with a psychology background, I’m fascinated with people’s stories and motivation for how they live their lives. And it seems like everywhere you turn, you run into people who are connected to the military, each with a story to tell: a fellow teacher whose son was killed in Afghanistan; a classmate who was a nurse at Landstuhl, the US military hospital in Germany; as well as coworkers, friends, and relatives who’ve served.

So many veterans come back and say they’re ignored. I wanted to try to tell their stories because so often I think civilians take for granted the sacrifices service men and women and their families have made, sacrifices that affect them for the rest of their lives.

10. What else about your story might pique the reader’s interest?

Even if you’ve never been in the military or been close to someone who’s served, chances are you’re connected somehow. These are stories everyone can relate to.

11. What has been the hardest part about writing this story?

Getting the details right. I have no military experience, so all my knowledge comes from books I’ve read, movies and documentaries I’ve seen, and people I’ve talked to. Fortunately I have quite a few people I’ve been able to go to for questions and they’ve been more than happy to explain everything to me, as well as add their own insights. To that end, however, I’ve decided not to write about actual combat because I don’t want to mess anything up.

Hearing from readers that I perfectly captured an experience they had or could relate to, especially veterans.

13. Has writing this story illuminated any of your own strengths or weaknesses for you?

Yes, that if I pay attention to details, to what someone isn’t saying when they talk about their experiences as well as what they do say, I can pick up on their motivation well enough to tell their story accurately.

And that I procrastinate way too much; I’ve been working on finishing these stories right up until the deadline, rather than making myself work on them sooner.

14. What misconceptions do people have about your genre, and do you think your story addresses them?

My mom once asked me what kind of stories I wrote: horror, sci-fi, etc. I told her contemporary fiction, about everyday people and events, and she responded, “Who’d want to read that?”  A lot of people read for the escapism value, and that’s missing in stories about ordinary life.

However, I think that reading contemporary stories is extremely important because they give insight into the lives and experiences of the people around us, people who often aren’t willing or able to share with us, but whose stories are no less valid.

People don’t exist in a vacuum; at more than one point in your life you’re going to have to deal with people who aren’t like you. And you’re going to have a much better outcome if you can get inside their head, which is something I think contemporary fiction can help with.

15. What is your favorite scene you’ve written for this story?

Scenes don’t really apply, so I’ll comment on the stories instead. Two of them are about a pair of friends, Abby and Eli; the first, “Burger Run,” is set during the summer after they graduate high school, and the second, “A Wedding,” is ten years later, when they’ve come back to their hometown.  They’ve been best friends since they were babies, so they have this powerful bond between them that they’re not really consciously aware of.  I love how it gradually dawns on them when they need each other most.

So that’s my Next Big Thing. There are so many authors that read my blog, rather than tag anyone in particular, I tag whoever’s reading this. So you. Yes, you! What’s your Next Big Thing?