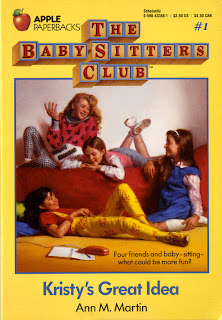 What girl growing up in the 80’s and 90’s wasn’t familiar with these books? When parents needed a babysitter, they could call a group of middle school girls and easily get a sitter.  Entrepreneurship for kids, basically.  And of course, all the pre-teen drama you could ever want: boys, family issues, cat fights, fashion, etc. And don’t forget how you could always skip the first chapter, because it was the exact same background rehash in every single book.

I first started reading these books in probably second or third grade, when to be in eighth grade was to practically be an adult.  These girls rode the bus to the mall!  They wandered around New York City having adventures! They went on dates!

Looking back, as both an adult and a parent, shows just how silly and unrealistic these books are.  I would never let a junior high kid babysit my son, and he’s the most level-headed, danger-adverse kid I know (“No, Mom, I won’t climb up on the counter to get my own cereal; I could get hurt”); and in some of these books, sixth-graders are babysitting.  Eleven year olds are watching toddlers.  Nope, ain’t gonna happen.

And as for what the girls themselves do – would any parents let their small-town thirteen-year-old daughters wander the streets of New York City unsupervised? Would they let them dress in outfits that make them look five years older?  Would they let them loose to wander the streets of town with other people’s small children in tow? (Okay, yes, some parents probably do let their kids do all that. Those are bad parents.)  Maybe I’m just being a helicopter parents, or maybe times have changed – but I don’t see most parents giving these girls such massive leeway.

I guess it comes down to audience, though.  By the time a girl is in junior high, she’ll have moved on to Twilight and all the teen paranormal romance crap, and she won’t be interested in chaste, unrealistic babysitting adventures.  Girls in elementary school, however, will probably be like I was – too impressed with the adventures to worry about accuracy.