Today I’m lucky enough to be interviewing author Laurie Paulsen, whose book Grasping at Shadows: A Collection of Short Stories, has just come out.  She recently chatted with me about what she puts into her dark horror stories and why, as well as sharing some advice for fellow writers. 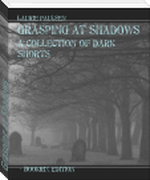 Me: Okay, first question: Why do you write such dark stories?

Laurie: It’s funny, because I’ve tried to write other types of stories, but they’ve never felt “meaty” to me. My mind wanders, I lose interest. Maybe I write dark stories because they’re the stories I like most to read. That may be a circular answer.

I also like watching how characters face the worst possible experiences. I identify with them, like I hope other people do, and it’s revealing to imagine living through (or not) traumatic events.

Me: You mention you like to read dark stories.  What are some of your favorites?

Laurie: Dark Harvest by Norman Partridge is amazing. It’s a short novel; he’s also written several short stories, all of which are great (those I’ve been able to find.) Everybody mentions Stephen King, but I do admire his ability to create memorable characters. I still think of the Petrie boy from Salem’s Lot, and I read that book in the late 70’s (I think.)  Dan Simmons writes everything, and I liked his Children of the Night very much. Also, Carrion Comfort scared the crap out of me, in a building tension sort of way. I never took Frankenstein very seriously until I read the book, and the level of disturbing accomplished in that book is impressive. A short, intense read.

Me: Speaking of tension – what is it that you find so scary in stories?  In some of your stories – for instance, “Retribution,” Night Dust,” and “Ritual Magic,” you show us the bad stuff that lurks in the dark.  But in others – like “Basement Jacks” – it could easily be portrayed as the main character’s imagination.  Which to you is scarier – identifying what’s there, or just hinting at it?

Laurie: I’ve seen way too many horror films that start strong and then peter out, once you figure out what’s really going on. So, the imagination can do a lot for the story, allowing people to picture their own version of a particular terror. Regarding the stories in which I try to be specific, I probably started out with that particular image in my head and built the story around it. That happens a lot. I find children especially frightening, when there’s something “off” about them – so, I use that often. It may appear I enjoy doing horrible things to children in my stories, but really, they’re the scary ones.

Me: I’d definitely agree with that.  “Basement Jacks,” about a little girl whose walls talk to her, is freaky.

Laurie: I remember thinking the threat in “Basement Jacks” was so clearly supernatural, but several people have read it as a story of child neglect. Layers, man. I’ve got layers.

Me: You certainly do, and I think with those layers your stories can be read over and over again, because they don’t rely on a gimmick ending.  It’s a great thing to read in short stories, where you have to cram in so much.  Do you try to write with a specific word count in mind, or do you let the story decide how long it should be?

Laurie: Thank you for that. I’m happy they work all right, and love that they’re re-readable. I don’t typically work toward a word count, but start with a specific image or nugget of an idea and just see where it goes. Sometimes it goes absolutely nowhere, and I end up in the kitchen with a sandwich. Other times, it’ll grow legs and run off with me. I’m still working on developing the skills for longer work. I’d love to write novels, eventually.

I’m very conscious as I write of not boring people. That may be why there’s so much crammed into relatively few words.

Me: I assume your novels would be just as dark as your short stories?

Laurie: Likely. I wish I could write romance, actually. Maybe I’ll pull off a dark romance.

Me: Dark as in everyone dies, or dark as in half the couple is undead?  Or a combination?

Laurie: Sooo many possibilities, right? I bet a lot of people would die and horribly, possibly one of the main characters, and the Hero of the story would emerge scarred but ready to love again. Or, something. I haven’t written often from the Creature’s POV, so zombie love would probably be out.

Me: You seem to have that theme – moving on – in a lot of your stories. You say in your book description, “To lose everything and continue makes them gods.”  But it seems to me the stories aren’t just about continuing; it’s about finding a connection between those living and those dead, and then finding closure within that connection.  Would you agree with this theme?  And was it intentional?

Laurie: That’s an amazing analysis. Yes, I think closure is a big deal for me, in general. Closure and connection are so intertwined, so it’s a natural flow from one to the other. I access my own pain when I’m trying to create an authentic moment for one of my characters, and along with that comes the unresolved longing for peace. In a way, I suppose I revisit that missing element over and over – it’s powerful, and universal. Everyone’s lost something, feels that hole left behind. I want to trigger that for people when they read, so we connect with each other in a squirmy, intimate kind of way. I see it as a particular kind of courage, that endurance in the face of loss. I admire it, I guess, and would like to embody that more often. As far as intention, I’ve only specifically aimed for closure in two stories, neither of which are in this collection.

Me: I think what makes your stories so re-readable is that the characters don’t often get that closure.  The one that sticks out the most for me is “Abandoned But Not Forgotten.”  I don’t want to give away the ending, but the last line was great.  It really left me wanting to know more.

Laurie: Thank you – I really like that story, the sweetness of it. I see the main character as working toward her ability to make peace with her loneliness, while missing a huge opportunity at the same time.

Me: You also have two stories where half the couple has died, and the remaining person reacts to the loss by trying to maintain the connection – “Killing Chickens is Easy” and “Comfort in a Time of Gray.” I think those are memorable because they’re searching to keep that connection, when they need to move on.  Do you think those are stories that are easier for people to relate to, rather than something about werewolves?

Not that I’m knocking your werewolf story.  That one was also about connecting with the dead and finding a way to move on.

Laurie: I admit I’m happier when my characters don’t find happiness. For some reason, it allows me to believe because the story isn’t finished for them, it isn’t for me, either. I think the relationship in the story being one grounded in some kind of reality, rather than a hairy beast chasing someone through the desert (scary, but not so immediately real) gives people an easier “in” to the real meat of the story. So, I can see your point about feeling more accessible. No suspension of disbelief to wade through before getting to the good stuff, so to speak.

Also, short stories sometimes require a shorthand, in order to communicate enough to set a scene or relationship in a shorter amount of time. So, monsters require specific description to really be there for people. Humans beating each other up already exists in this world. Bam, there it is.

Me: I wouldn’t say any of your characters really found much happiness in this collection.  But I’ll admit, I’m not a fan of happy endings either.

Laurie: Yeah, no train to HappyTown pulls through this station. Not this time, anyway.

Me: What are your current projects, and will you go the same route as you did with Grasping at Shadows?

Laurie: Currently, I have plans to work on a second collection – the stories are written, but need revision. I expect to e-publish that collection, too – it’s been a great experience with this one, I gotta say. I have no fewer than eight novels started. I think I might have an attention span problem, but am determined to master the form.

Me: Last question for you: What tips do you have for other authors who want to get published?

Laurie: The traditional market is extremely competitive – so many great writers out there, and a limited number of opportunities to be seen. I’d suggest accepting lower-paying publications to build an audience, doing your best to keep your best foot forward when dealing with editors, publishers, cohorts (word gets around, I understand,) and not fearing the self-publishing route.

As far as writing goes, everyone has their own practice that works best for them. There’s no one right way to write well. But I would say that cultivating a rich environment from which to grow those stories is important. That means reading all sorts of stuff, learning as much as possible about the world and how it works, and not being afraid to play with it. That’s all I’ve got, I think. Unless I left out something important.

Me: I think that’s great advice. Anything else you’d like to add?  About writing, horror stories, life in general?

Laurie: Golly. Yes. Like many writers, I can get angsty about the whole exercise. What am I doing? What’s the point? Why am I even trying, when I’ll never … et cetera. Every time I’ve convinced myself I was done, that the struggle wasn’t worth it, I found a way back in. I think my subconscious found it for me, and my friends shoved me gently back to my desk. I’d like to urge anyone who writes or who wants to write not to give up. It’s an endeavor that will drive you nuts sometimes, but the rewards are amazing. Do it. Stop thinking so much and just do it.

Me: Exactly. There are so many options now too – you can self-publish, submit to billions of publications at all levels, share it with your friends on a blog, even hide it in your desk drawer.  But if you want to write, do it.

Laurie: Yes! It’s not about selling that blockbuster, so much. It’s about the unique connection writers and readers have, across those pages. It’s a kind of magic, really.

Make sure to check out Laurie’s book, Grasping at Shadows: A Collection of Short Stories.  You can also connect with her on Twitter – @PaulsenLM – or at her blog.