Another NaNo is wrapping up.  My official stats: 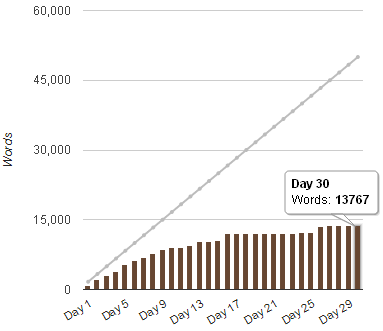 Overall, it was a pretty pathetic showing on my part. I had a strong (relatively speaking) start, but then pretty much crapped out as the month progressed.

But what’s important is that I’m now almost 14,000 words further along in my WIP novel, A Handful of Wishes.  And I learned several important things:

That being said, I’m still glad I did NaNo this year.  And I’ll probably do it again next year, with the same results.

Did you NaNo this year?  How’d you do?  Any thoughts to share on the whole process?