Everyone always bemoans the loss of creativity in schools, forced out in favor of standardized testing.  In an attempt to combat that, for their end-of-term final project my students (age 16-19) did a group art project.  I wanted them to make a life-size papier maché giraffe, but they decided on a time machine instead.  And this is the result, made using only materials in our classroom that day – styrofoam trays, staples, masking tape, unbent paper clips, and a couple popsicle sticks (to make the front panel – the “door” – flip up so you can get in).  And, of course, a calculator for punching in the year to which you want to travel. 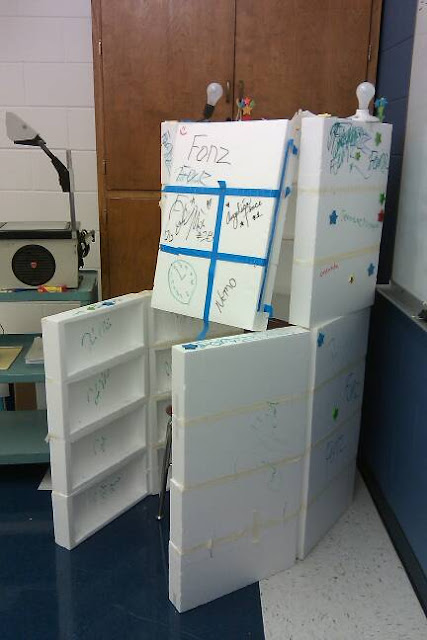 The best part, however (aside from now having my own classroom time machine), is that they made this as a group.  I gave them a task, and my eleven students came together and made this in 1.5 hours.  They used a trial-and-error process to assemble it, and if someone had an idea they tried it, rather than shooting it down.  They organically took turns giving directions and keeping each other on task.

I am so proud of all of them.